Okay, I want to fill you in so far on my dealings with The Beast.  The Beast is what I call my most aggressive hive.  In truth, I would not be surprised to find out that the hive contains Africanized Bees but it most likely contains an aggressive Caucasian verity found in Southern Mississippi.

At first I attributed the 30-50 stings per visit to the fact I had been rough with The Beast.  As I pointed out in a previous blog, I dropped it.  I also had to work roughly with it last year to loosen the propolis.  Then I thought that it may have been caused by using cedar chips in my smoker.  So I switched to pine.  Then I stored some (Unscented) dryer sheets with my with my pine chips – Dryer sheets are a non-pesticide method of dealing with Hive Beatles.  So I bought new chips.

No matter what I do, these bees sting me 30-50 times if I try to go any where near the brood chambers.  Oddly enough, they don’t seem to mind if I take the honey suppers, as long as I don’t go any further.

I have gotten fairly creative with my dealings with the hive thus far.  For starters, I normally like to work my bees in just a long sleeve shirt, hat and veil.  However, the bees sting me right through my shirt and jeans.  So I bought a full suit with zip on veil.  The bees didn’t care and stung me right through that as well.

Next I came up with a really good idea.  I made a vest out of rope and zip-ties and put it on my under my suit.  This pulled the fabric up off of my body.  It worked great but the bees still stung my thighs and ankles. 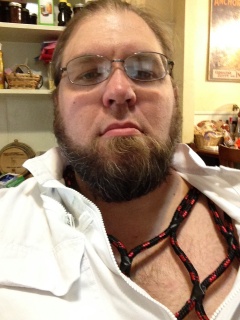 The vest did a great job of not only protecting me from the stings but also seemed to keep me much cooler.  Of course the second time I wore the vest, I wore a long-sleeve t-shirt under it for protection of my upper arms and that proved to be pretty hot.

I plan to make a pair of matching pants.  The rope cost about $6 and the zip-ties were about $1.  So it wasn’t a very expensive fix.

Nonetheless, I have only managed to reduce the amount of stings but not prevent them altogether.

Next I had the bright idea to use a spray bottle filled with sugar water.  I thought that since it worked so well to keep the bees from flying when I first installed them, then it might work to keep the subdued until I could finish working the hive.

Before I knew it I was coated in sticky stinging bees.  My glasses were glazed over like a doughnut so I couldn’t see anything.  It was a nightmare.  My only course of action was to run to the truck and leave the hive laying open.

I came back the next day, employing my wife as the getaway driver.  I suited up: rubber boots, jeans, long sleeve shirt, long gloves, TWO veils, and my suit.  I still got stung about 5 times and you can see from the picture above just how many stinger went into my suit.

I quickly put the hive back together and then dove into the trailer as my wife speed me off down the gravel road while I was being pursued by a legion of angry bees – still angry from the day before!  I nearly fell off the trailer twice while I swatted the bees away.  A mile down the road we stopped.  I sprayed off with some Raid and we drove on for another half mile.  Finally I was free of them and we went home.  That was three weeks ago.

I have given it a lot of thought and the hive has to be re-queened.  I am simply going to have to bundle up and get her out.  I’ll let you know what happens.