Well I didn’t get back out to Dr. D’s place until Saturday around noon. I’d like to say it was because I worked late but truth was, I was just exhausted by the time I got home from Vicksburg on Friday.

Anyway, Saturday was pretty rainy but it let up for a few hours around lunch – though it was still very cloudy. The bees weren’t flying much, which was good, because it let me see just how many bees were still in hive D.1 – one solid frame worth.

About (8) or (10) bees were huddled around the queen cage. When I let her out she rushed down between the frames – I hope due to labor pains! 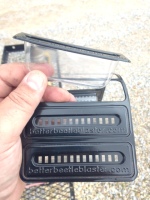 Of course the real news is that the hive was still infested with beetles. I bet I mashed (50) or (60) of them with my hive tool. Then I scraped the larva into a puddle hoping to drown them – in retrospect I should have scraped them into my smoker. Just like Yoko, I didn’t stop until there were no signs of the beetles left.

I then scraped off the end of my Fat Bee Man traps (and shook them by my ear to make sure the powder was loose – it was). Then I placed (2) dryer sheets on the top bars and (3) beetle buster traps filled with mineral oil. If that doesn’t break up the group I may have to get some pesticide.

I got stung just once – not bad given it was cloudy and windy.

That was Saturday… I spent the rest of the day doing fuck-all. I’m ashamed that I wasted a whole day but I did. 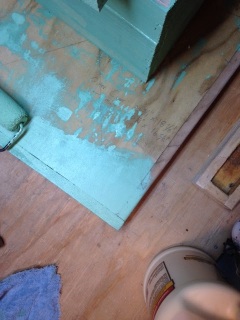 Then I made (12) Mini frames. I didn’t make them like the Dadant style with all the fancy (TIME CONSUMING) cuts. Instead I used a bunch of scrap bottom bars 3/4″x3/8″ and quickly cut, clued, and stapled them together. I also glued wax coated popsicle sticks to the center of the top bar, since these are foundationless frames. All (12) only took about 30 minutes. If I had a Jig, I probably could have made (100) an hour.

Of course spacing them will now pose a problem but I would have to attach 5/16″ shoulders to the each side to make them look like Dadants. I’m still working on that problem.