I’ve been quoting that line since 1997 (holy shit – I just realized how old that movie is… even worse… how old I am) – actually I’ve been misquoting it, as the case may be, since I always say, “It can’t rain everyday.” Either way, I’ve had two sunny days in a row now and I hope the trend continues.

Yesterday, Noah and I went to Dr. D’s to get two frames of eggs. I say eggs because if there are eggs then the adjacent larva is young enough for queen rearing.  While there, we did a few quick hive checks.
﻿﻿
We didn’t check Hive-A. Until we requeen it, I could do without the aggression – so we moved on.

It turned out that our walkaway split of Hive-B was textbook. The queen actually ended up in the split (Hive-B.1) and is doing really well. So we knew Hive-B would have the queen cells and boy did it. There were at least (12) to (15) cells. There was a lot of bees in both hives and they were all very docile.

Hive-D.3 is still infested with beetles and there is still about a hundred bees waiting inside for death.

Hive-C looked much stronger. I still need to split it and replace the rotted boxes but it seems to be doing fine.

The last thing we did was to take (2) frames of eggs from Hive-VSH, without taking any bees, and put them in a Five Frame Nuc (i.e. VE). We then shook (4) frames of bees from Hive-B into the nuc. If that doesn’t survive the beetles then it is hopeless.

To finish our visit we placed Don the Fat Bee Man beetle traps in all of the hives.

We took VE home and did the following:

One frame of eggs was placed in Hive-A.1.VSH to let them raise their own queen.

The other frame was taken to my shop table where I made my grafts. The queen cups had been in VD (giggle giggle) overnight for polishing and were made from new (chemical free) wax. I also kept a moist towel over the larva while I grafted them. 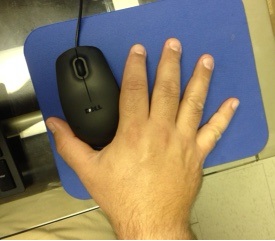 It again took me (30) minutes to complete my grafts. I would have liked to have gone faster but I’m still learning and it is very delicate work – especially for a guy with Bananas Hands (That’s my wife’s nickname for me).

When I completed my grafts, I took the remaining frame of eggs and, using the Miller Method, cut it in a zigzag pattern.

The miller frame was placed in VE and the grafts were placed in VD (giggle giggle).

On a separate note: I found about (5) hive beetles in VD (giggle giggle) and a few beetle larva. All of them were on the bottom board and it appeared the beetle larva was eating the Crisco in the FBM traps. I squished all of the beetles but left the larva in the Crisco to see if that kills them.